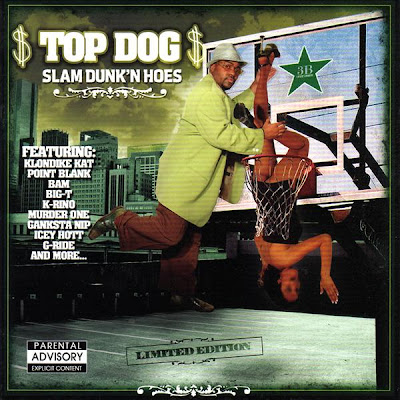 When I saw this album cover, I burst into laughter. Slam Dunk’n Hoes……..WOW. This is one of the wackest album covers & titles I’ve ever seen. I wonder whose idea it was to name the album Slam Dunk’n Hoes. Why would you want to slam dunk hoes? It appears the guy on the cover ‘slam dunk’n’ is a pimp? Or a hustler? Or a basketball player before a press conference? Or maybe he’s a pimphustlerballerplayer. I can imagine how the design process for this album went. I’m sure it went something like this, ‘hey dog, I wanna be dunkin’ a hoe on my album cover, like Shaq. I want these hoes to know how I be ballin’ in da game’. The look on this guys face is so nonchalant. His expression says “this is what I do, DAILY”. As for the ‘hoe’ that he’s ’ dunk’n ‘, she’s probably saying ‘Oh my God! I got dunk’d’. This album cover is sad but so funny. Oh yeah, his outfit is wack too. Two thumbs down.