During New York Fashion Week (9-16-09),I was asked to be apart of an event called ‘Pop Is Dead’ in SoHo. I was asked to paint something that showed how Hip-Hop culture is commercialiazed or something along those lines. My first idea was to paint Kanye. He’s such a talented artist & a trendsetter. So much, that if he wore something ridiculous ,like a Rick James leather jacket with tassels or a Mr. T feather ear ring, people would probably go out and immitate it. Basically showing that people are influenced by media,television,internet, etc. 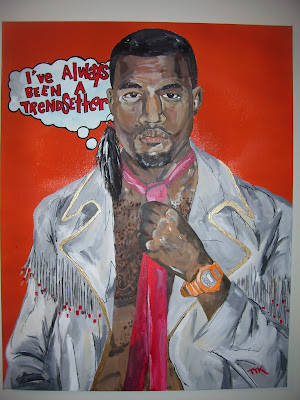 My second painting, was dedicated to how mainstream rap can be so fake/Hollywood. I chose to paint Rick Ross for this one. I painted him because he made a name for himself portraying to be the REAL Rick Ross. The REAL ‘Freeway’ Ricky Ross, made millions of dollars selling cocaine during the 1980’s & is in prison today. Since he always raps about selling Coke, I figured I’d do a parody of his whole persona. ENJOY. 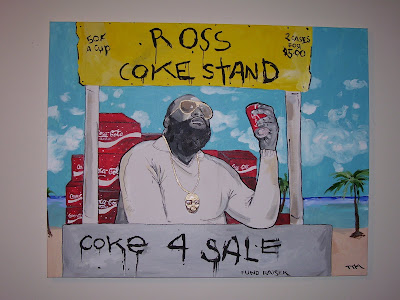